From the Archives: Why Are We Called “The Painted Bride”?

Founded in 1969 by a group of visual artists who had recently graduated from the Academy of Fine Arts, the Bride was part of the Alternative Art Space movement, which is a small genre of cultural organization in America that grew from a movement in the late 1960s and early 1970s. This movement sought to establish organizations where artists had greater control over the presentation of their work and were able to present the work of the underrepresented (women, people of color, gay and lesbian artists and the disabled ) in commercial or larger established institutions. In the past 43 years the Bride has evolved into the innovative, internationally recognized, artist-centered, multi-disciplinary institution you visit today.

Ok, ok, I still haven’t told you HOW we got our name. Well, it’s quite simple really, our very first home was in the front of a Bridal Salon on South Street, hence, painters, bridal salon…Painted Bride Art Center was named.  Today we proudly embrace the name “The Bride” and we are grateful that the other potential names such as  “Your Fly is Open” or “Victim Gallery” didn’t stick.

The original Painted Bride at 527 South Street featured a mannequin in the window and people would walk by to see what outrageous outfit she was wearing. (yes, that is a young Gerry Givnish)

From South Street, we had a small stint on Bread Street in Old City, and then finally settled where we are today at 230 Vine Street.  The building wasn’t this beautiful when we first opened up. At the time the  building was a raw industrial space used as an elevator factory and where the gallery is today was a row home: Here is the building in 1988  as they begin to build the gallery.

The outside of the former industrial building. 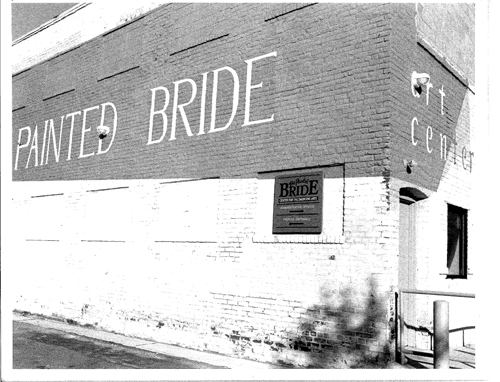 Currently The Bride is completely covered by Skin of the Bride, a mosaic by Philadelphia artist Isaiah Zagar, which he created between 1991 and 2000 and donated to the center.

Here is the building in the middle of mosaic-fication: And, well, you know what the final product looks like 😉